Samsung announced their earnings a few days ago they said their smartphone sales are up in Quarter 3 of 2019 and they credited the Galaxy Note 10 and Galaxy A series of devices for the increase in numbers.

Samsung has gone through some transformation as of late with its Galaxy A range of devices bringing some value to this lineup. Galaxy A50 launched five months ago, and it’s already one of the best selling smartphones of 2019.

So a lot of people are excited to see what its successor would bring to the table, and thankfully today, we have the first look of its sequel, named as the Galaxy A51. Also, we have some key specifications of the handset.

This comes courtesy of Onleaks who, as you already know, is one of the top insiders out there. As you can see, it has a punch-hole display and very minimal bezels.

Here comes your first look at the #Samsung #GalaxyA51! 360° video + official looking 5K renders + dimensions, on behalf of my Friends over at @Pricebaba -> https://t.co/mvayygNYd4 pic.twitter.com/2ianDjMH7y

It looks like the Galaxy Note 10 from the front, albeit the camera hole is even smaller than Note 10. I guess the Galaxy S11 is going to have a similar-sized hole. 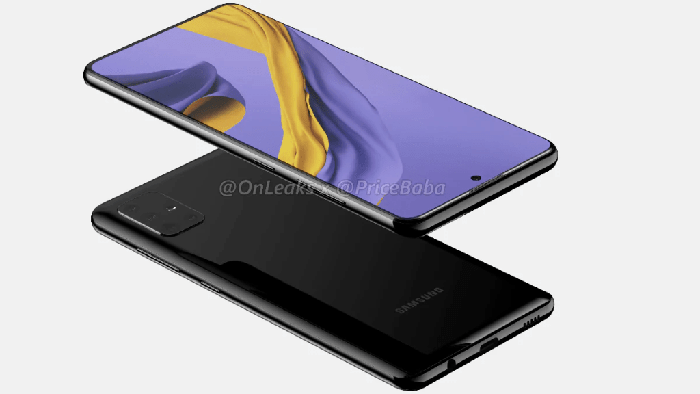 On the back, it has a very uniquely arranged L shaped camera setup. Galaxy A51 camera Reminds us of the Pixel 4 and iPhone 11 Pro’s camera setup.

It consists of a 32MP primary lens, a 12MP wide-angle, a 12MP telephoto sensor with 2x optical zoom, and a 5MP depth camera for better portrait photos. It also comes with an in-display fingerprint scanner just like its predecessor, and surprisingly, there’s a 3.5mm headphone jack.

Quite a strange world we live in where flagship phones don’t come with headphone jacks while budget and midrange phones do.

Other specs include a 4000mAh battery, 32MP front camera, four and 6GB of RAM, 64 and 128GB of storage, and Exynos 9611 processor, which is built on the 10nm process. That said, specs-wise, I don’t think the Galaxy A51 offers much over the Galaxy A50. The majority of the specs are similar.

But I think Samsung is banking on the design this time. It looks like their flagship phones from the front, which, when you consider that it’s a mid-range phone, is impressive.

The bezels are skinny, and it does look premium, at least from the front. Like I’ve said, the Galaxy A50 was Samsung’s best-selling mid-range phone in 2019, an extra camera at the back, a premium looking front would surely help Samsung make the A51 sell even more than the Galaxy A50.

But the thing is to do that they need to price it sensibly. Since there aren’t significant changes, it only makes sense for Samsung to keep the price the same as the Galaxy A50 if they want to replicate the success the A50 was able to achieve.

Let me know your thoughts on this device.